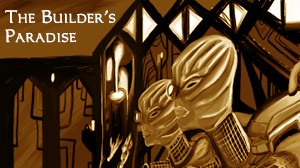 -Viktoria's plan required too much luck; Garrett was obviously unable to stop Karras with it. Afterwards, he scoured many Mechanist churches for information, and learned of a tunnel Karras had b... Read more

- Some objects, doors or switches might looks broken, or their function unclear.
DO NOT WORRY: they are all useful; perhaps later readables or goals will
inform you! Be curious and explore! :)

- To make the experience fun for those who are playing for the first time,
avoid as many public spoilers as possible.

-Viktoria's plan required too much luck;
Garrett was obviously unable to stop Karras with it.
Afterwards, he scoured many Mechanist churches for information,
and learned of a tunnel Karras had built for himself at SoulForge.
It led to a large, guarded, and secret safehouse called the "Builder's House"
intended to become the core of a new city Karras planned to build:

Garrett now knows enough; some machines there could
be used against Karras to stop him, without risk of failure.
All he needs to do is get access to this "Builder's House",
put together some final pieces from the information stored within,
and ensure Karras is defeated.

After an eternity crawling through vents,
navigating the complex tunnels beneath the City,
he finally reaches a basement below the compound.

Will he succeed in his mission?
It's up to you!

the competition is underway - results hidden

The competition is underway and players are voting - results are hidden. Please consider voting below, too!