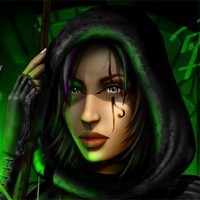 
The Cinder Notes is a very aesthetically attractive FM with a large number of (comparatively) high quality assets (which I think are ripped from Thief 3, though the documentation was a little difficult to understand on that front) and some absolutely gorgeous lighting. The level is compact and makes good use of verticality and levels; more than once I found myself falling into a natural flow of spying an open window from another high point and shooting a rope arrow into its sill to climb up later from ground level. Many of the spaces designed here feel realistic and architecturally justified, and there's even a little roof patio at one point. I love a little roof patio, me.

The objectives send you all over the level itself, and in an astonishing act of mercy, you are not required to linger very long in the one area that is crawling with a particularly irritating and indomitable Thief 2 enemy (one that doesn't seem to turn up very often in FMs). Most of the time you can wander about in the lovely sunshine (and its complementary shadows) up and down the walls, down into the sewers and around the canals.

The plotline is also reasonably good, making logical sense and drawing lines between its readables and its implicit storytelling. There's a puzzle or two and these are reasonably well signposted. I enjoy how the noble character doesn't just live in a big house, but in a repurposed seminary- definitely a fun character detail!

I've not said much wordcount-wise for the positives for this FM but don't be fooled- that is merely because they are simple pleasures to explain. They really do bring the environment of the mission to life and the aesthetics are absolutely top notch, better than pretty much any other FM in the competition (that I've seen, anyway). I was never bored by my surroundings in this mission, and it was always interesting to see where I had ended up and understand it as a place that could, for a reason, exist!

Unfortunately for such a beautiful and well-considered mission, The Cinder Notes does have its flaws:

The objectives are inexpertly conveyed to the player- there's no briefing or cinematic, and the change in wording between the pre-mission and in-mission objectives confuses the issue on more than one occasion- On Expert, for example, the pre-mission objective text exhorts you "not harm anyone", but this is revised in-mission to not *killing* anyone. Anybody who knows that the blackjack deals 1 damage would no doubt assume the pre-mission objective implied a forced ghosting mission, so it was a surprise to discover this was not the case. Additionally, there is a lot more information about the "stolen painting" objective available before the mission than during it. It's hard to see why these reductions were made, since the objectives, even on Expert, are nowhere near hitting the font size change threshold and there was plenty of room. Even the description here on Thiefguild is sparse and offers little in the way of information. I will check out the ttlg thread for this mission a little later to see if more can be found there, but even if it can, that isn't really good enough.

There is no map in this mission, which is a disappointment because some of the subterranean maze-like areas could really use one. In fact there isn't even a blank page for notes, which is utterly perplexing because there is an objective-required section of the FM where you *explicitly need to take notes* to solve a puzzle. This seems like a strange oversight, and not one in the FM's favour.

Finally, the general loot quota is too low. Definitely on Expert, but probably on all three difficulties. I wouldn't normally be one to complain about not having to scour every nook and cranny for lost pennies (there are certainly FMs in the competition entries with the opposite problem) but here the quota is SO staggeringly low that you'll meet it while still bumbling about the level trying to figure out where the objectives are. It barely feels like it has any business being a required objective.

This is a pretty good (and plain pretty) FM with a lot to recommend it, not least visually and in terms of fun freedom of movement, but its flaws, odd as they are, stand out pretty plainly.